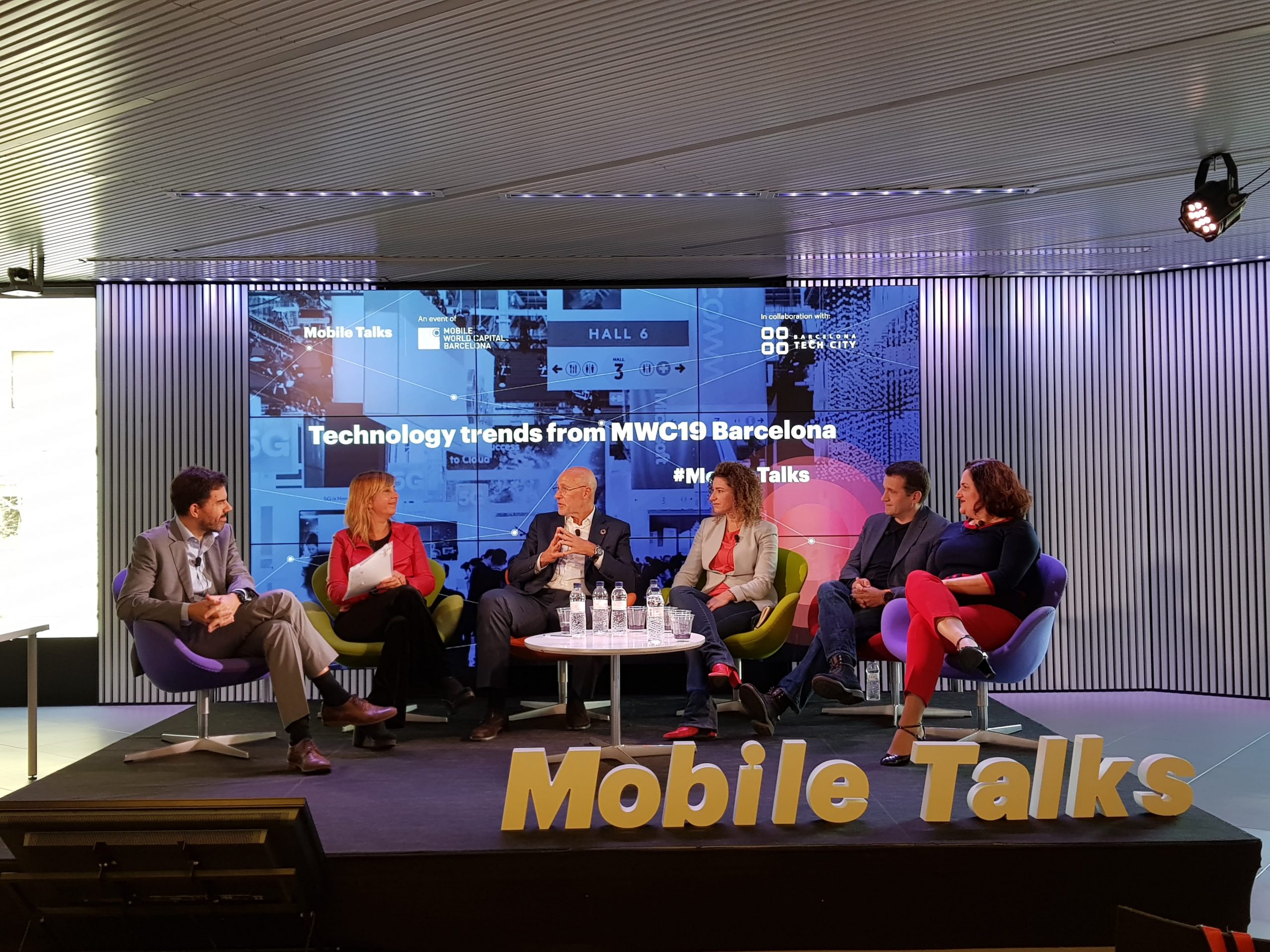 After the success that the Mobile World Congress had in its edition this year and the growth of 4YFN, Barcelona will continue its path to position it as worldwide technological and digital hub, thus as referent in the development and implementation of trends and business models. 5G connectivity and Artificial Intelligence: the trends of the year.

To make an analysis of the trends, challenges and news that were highlighted in the MWC19, the Mobile World Capital supported by Barcelona Tech City, got together on the Mobile Talks, that counted with the participation of Carlos Grau, CEO of MWC Barcelona; Miquel Martí, CEO of Barcelona Tech City; Montserrat Pardo, Director of Communications of  Microsoft Spain Enrique Pérez, Regional Director of Huawei and Francesca Gabetti, CEO of TeamEQ. The event was moderated by the journalist, Xantal Llavina.

At the Movistar Centre Barcelona, the assistants of the event had the opportunity to talk about the most remarkable moments of the MWC19 and the 4YFN, share experiences and analyse opportunities for the future editions.

One of the big objectives, regard to the implementation of the technologies 5G, artificial intelligence and virtual reality that were developed in this context,  as far as possible prevails the people quality of life, improving the connectivity and the time, as a result, generates greater saving energy . Both Artificial Intelligence and 5G connectivity complement.

These technologies has started transforming the way of seeing the world, as much as the business models will continue changing the different industries. To Carlos Grau, CEO of MWC Barcelona, a great example it’s what MediaPro is trying to do, leader group in the audiovisual sector in Europe, with the Barcelona tourism. Currently, there are creating pilot projects of vehicles with 5G connection with the objective of interact  with the city trough virtual reality.

The transversality of the artificial intelligence helps to develop and improve all the productivity sectors of the society. “The artificial intelligence helps finding the right people to a team job”, secures Francesca Gabetti, CEO of TeamEQ. On this scenery, the startups have the possibility of develop technologies and digital processes more strong and efficient. Likewise, Gabetti explains “the diversity to create value with a technology design for people and by people. That’s also one of the objective of the team”.

Besides worth to mention about what Movistar is doing to improve the experience of the user with the Barcelona Futbol Club and the implementation of the glasses of virtual reality. Soon the consumers could feel like they were on the stadium from home.

Thus, Miquel Martí, CEO of  Barcelona Tech City points the relevance of doing events like 4YFN for the city. “Having a society prepared from the technical is basic, therefore, efforts like these make of Barcelona, a model of entrepreneurship that can extrapolate to other places of the world”.

On the other hand, Barcelona plays an important role in the present. Carlos Grau, CEO of MWC Barcelona, “Barcelona is a laboratory of cases of the technological uses in Europe”. Highlighting this type of technologies there are not only exhibit it, but also it made use of them. For example, the facial recognition that it was used with the assistants to accelerate the entry to the event.

Montserrat Prado, Director of Communications of  Microsoft Spain, remarks the importance of develop and implement this type of technologies to “raise the competitivity to an european level”, to Prado it’s not just about of what the technology can do, it’s about what we have to do, this catalyst expands the visibility of the projects and attract a capable talent to improve the standard of capacity and competitiveness of the region.

Proceeding with the importance of attracting the talent,  Enrique Pérez, Regional Director of Huawei considers that, “thinking in the future is to make that the talent be recognized further on the technological advance, what is understood as the force that impacts the technology that promotes the advance and this is really important”.

For this reason, emerge the question: “What is the society of the future that we want with this advances?, likewise, it creates the debate about the approach of the ethical code with regard to the use of the artificial intelligence. This panel of experts is agree that is time to think about the rights and duties for the use of this type of technologies, besides the need of a major participation of the entities like de United Nations, the International Monetary Fund, and other corporations.